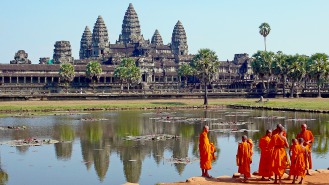 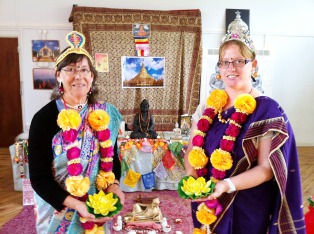 During a Buddhism workshop for schools, we enact the life of the Buddha through dressups and role play under a narrative. We also dress in Buddhist monk robes and enact how and why a monk (lama) is trained in the art of humility, patience and tolerance.  The displays present Mahayana and Theravada artefacts.  Both paths including Japanese Zen are lightly covered.  For more detailed information about our Buddhism workshops, please visit our new Buddhism For Schools website. 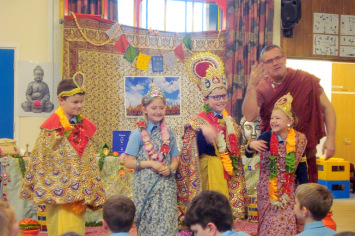 All the modules contain elements of the following items:

Buddha was born into a royal Hindu family of the Sakya dynasty in the Northern part of Bharat Varsha (India) in 563 BC.  In those days modern countries such as Nepal, Burma, Afghanistan, Pakistan, Bangladesh, Bulachistan, Tibet, Malaysia and Indonesia were all part of greater India called Bharatvarsha.  Buddha was born in the city of Lumbini (now in Nepal), as Prince Siddhartha the son of King Shuddhodhana and Queen Mayarani. 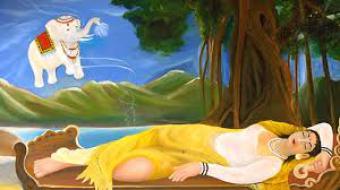 When Mayarani was pregnant, she had a very unusual dream whereby a white elephant approached her while she was sleeping and circulated her sleeping body seven times and entered into her right side. After consulting the royal astrologer, it was concluded that the child she was carrying was a special soul who had descended from the highest material planet known as Brahmaloka, where saints and messiahs are said to reside.  It is widely thought within Eastern religious culture that Lord Jesus also hailed from this most exhalted planet. Overjoyed by this news, the fortunate royal couple prepared for the auspicious birth of their wonderful child and counted the days to his appearance in this world. 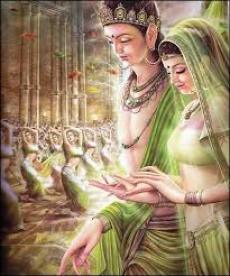 Yuvaraj means the young king or prince and Yuvaraj Siddhartha was a splendid example of royalty.  His mannerisms were exemplary and his stature was that of a highly noble personage.  It didn't take much time before everyone noticed that this personality was exceptional. The name Siddhartha (siddha artha), means one who is perfected by his work.

After the prince grew into a young man he was married to princess Yashodhara.  He lived an ideal life yet inwardly yearned to understand more about the world in which he lived. Siddhartha was so well protected by his parents that he never left the palace grounds and always wanted to know what the real world was like.  One day he slipped outside with a friend and was shocked to discover so much suffering in the form of poverty, disease, old age and death. 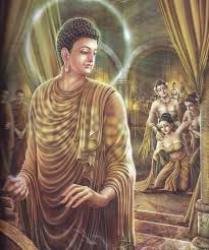 After due consideration, Siddhartha decided to leave the palace life of luxury and wanton enjoyment for the life of an ascetic monk.  When he left the palace, his family broke down into tears and despair but he didn't look back, knowing his mission in life was to relieve the suffering of the world.  In due course of time, he was to stop all kinds of animal sacrifice and promote a strict vegetarian diet which included no fish and eggs.  The ancient Egyptians used to refer to eggs as 'liquid flesh' and thus impure and unedible for the higher priestly and royal classes.

Ahimsa or non-violence was a major part of the Buddha's teachings and an ideal Buddhist should be a strict vegetarian or vegan though many 21st Century Buddhist partake of the non vegeterian quisine.  It is also common knowledge that a well balanced vegeterian diet is very healthy, aides natural clear skin, beauty and prolongs one's lifespan. 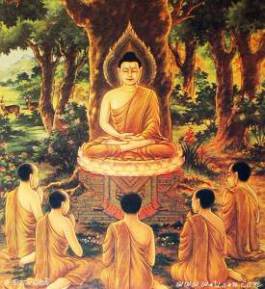 Siddhartha traveled to the city of Gaya in the modern Indian state of Bihar and sat under the shade of a Bodhi tree.  After many years practicing fasting, associating with saintly persons, meditating and performing various austerities, he attained enlightenment and overcame the illusiory energy by dint of his surrendered mood of devotion to his teachers.  Then the Buddha or the Enlightened One began his teachings to the sangha who in turn became teachers of his teachings.

Gradually Buddha's reformed teachings took hold and people in general who had strayed from the path of richeousness were brought to the path of wisdom and peace.  By focusing on the banning of animal cruelty and simplifying the message so that illiterate people may understand, he achieved greater and greater success. 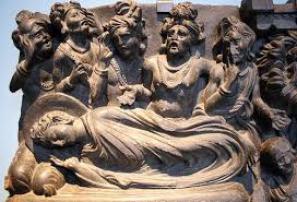 After leading a life of austere simplicity and spreading the message of peace, Lord Buddha left his body due to old age and a sudden bout of food sickness.  He entered into pari nirvana whilst lying on his right side surrounded by his sangha in the village of Kusinara at the age of eighty.

His famous lying position at the time of death is celebrated as pari nirvana or the final destination.