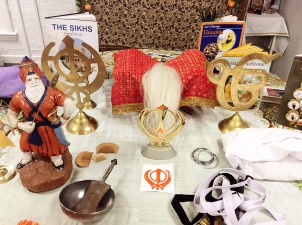 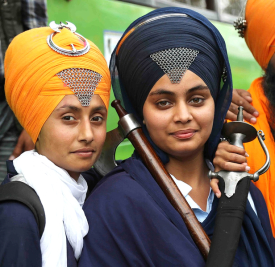 Sikhism (Punjabi: ਸਿੱਖੀ), is a monotheistic religion, founded during the 15th century in the Punjab region of the Indian subcontinent by Guru Nanak and continued to progress through the ten successive Sikh gurus, (the eleventh and last guru being the holy scripture Guru Granth Sahib. The Guru Granth Sahib is a collection of the Sikh Gurus' writings that was compiled by the 5th Sikh Guru. It is the fifth-largest  organized religion in the world, with approximately 30 million adherents.  The original name of Punjab in Northern India is 'Panch Aab' meaning Five Rivers and is the only state in the world with a majority Sikh population

Adherents of Sikhism are known as Sikhs (students or disciples). According to Devinder Singh Chahal, "The word 'Sikhi' (commonly known as Gurmat) gave rise to the modern anglicized word 'Sikhism' for the modern world.  Gurmat means literally 'wisdom of the Guru' in contrast to Manmat, or self-willed impulses.  According to Sewa Singh Kalsi, "The central teaching in Sikhism is the belief in the concept of the oneness of God.  Sikhism considers spiritual life and secular life to be intertwined.  Guru Nanak, the first Sikh Guru established the system of the Langar, or communal kitchen, in order to demonstrate the need to share and have equality between all people.  Sikhs also believe that "all religious traditions are equally valid and capable of enlightening their followers.  In addition to sharing with others Guru Nanak inspired people to earn an honest living without exploitation and also the need for remembrance  of the divine name (God). Guru Nanak described living an "active, creative, and practical life" of "truthfulness, fidelity, self-control and purity" as being higher than a purely contemplative life.  Guru Hargobind, the sixth Sikh Guru, established the political/temporal (Miri) and spiritual (Piri) realms to be mutually coexistent.

According to the ninth Sikh Guru, Tegh Bahadhur, the ideal Sikh should have both Shakti (power that resides in the temporal), and Bhakti (spiritual meditative qualities). Finally the concept of the baptized Saint Soldier of the Khalsa was formed by the tenth Sikh Guru, Gobind Singh in 1699 at Anandpur Sahib.  Sikhs are expected to embody the qualities of a 'Sant-Sipāhī'—a saint-soldier.  Sikhs are expected to have control over the "Five Thieves" and dispel these by means of the "Five Virtues".  To make a school visit to a West Midlands Gurudvara please click here. 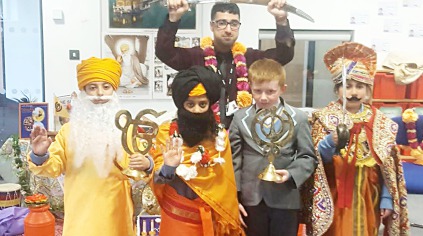 Here the young boys are learning  to wear the Dastaar or turban.  Our Sikhism workshop has a turban wearing module where children of all ages get to wear not only a turban but the five Ks including a nice beard and moustache. Even some of the girls like to have a go at wearing the moustache - muncha and beard - darhi, (sometimes called darji). They also re-enact the famous story of the 10th Sikh Guru Shree Guru Govind Singh who was not only a great warrior and leader, but also an accomplished poet.  The story depicts how Guru Govind Singh carefully chose his first five baptised men - Sant-Sipāhī of the Khalsa called Amrits.

Click here for a school report on ouir Sikh workshop. 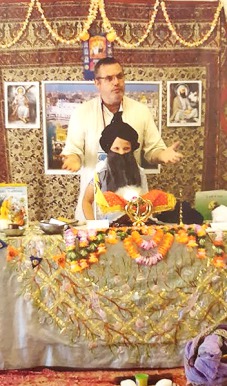 In this photo you can see our Sikh Gurudwar - Temple display which has three elaborate sections.  This pupil is role playing as

a Sikh priest and is bearing a beard and moustache or Dhari and Muncha with the Sikh Dastaan or turban and is standing behind the Sikh holy book called Shree Guru Granth Sahib. The Sikh men are called Singh  or lion and the women are called Kaur which translates from Gurmukhi into English as princess.  Initiated or baptised Sikh men and women are expected to follow a high code of morality and many are strict vegetarians, though some do eat non veg food.

Before reciting the holy book, the priest will chant the 'Mool Mantra' in order to invoke the blessings of the 10 Gurus and the infinite God Almighty.