Story of Sita and Ram and the Ten Headed Demon Raavan 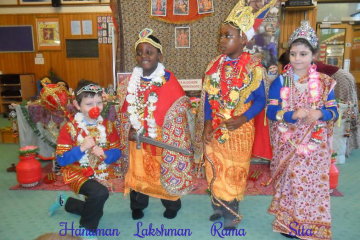 Our Diwali workshops are filled with activities that are celebrated during this joyous festival.  Dance, drama, music, rangoli, diyas and stories of the incarnation of Vishnu in form of Prince Rama and his beautiful wife Princess Sita. The children especially enjoy dressing up as the ten headed demon King Ravana, (pronounced Raavan) and the heroic monkey Hanuman who was a member of a special race of beings called 'kim purushas'.  Kim purusha literally means 'like a human' and this now extinct species of monkey-like humans were said to be common 1.8 million years ago at the time of Ram and Sita.  This epic story is taken from the ancient book called Shree Ramayana which was said to be written in the Tretra Yuga by the Vedic sage Valmiki Muni.

This Autumn the popular Diwali festival falls on July 20th 2020, the date is not available but you can still book your preferred date now and claim a 10% discount!