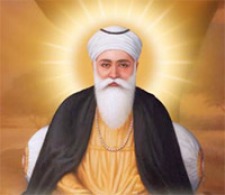 Guru Nanak (1469-1539) was one of the greatest religious innovators of all time and the founder of the Sikh religion.

Guru Nanak's birthday is celebrated by Sikhs on April 14th by the Nanakshahi calendar. (The date according to the lunar calendar changes annually but is usually in November.)

Nanak's religious ideas draw on both Hindu and Islamic thought, but are far more than just a synthesis. Nanak was an original spiritual thinker and expressed his thoughts in extraordinary poetry that forms the basis of Sikh scripture.

Little is known about the life of Nanak, but Sikh tradition has a much-loved set of stories or janam sakhis which relate various incidents from his life, and include many of his important teachings.

Nanak was born about 40 miles from Lahore (now in Pakistan) in 1469. Sikh traditions teach that his birth and early years were marked with many events that demonstrated that God had marked him out for something special and was keeping an eye on him.

His family were Hindus, but Nanak soon showed an advanced interest in religion and studied Islam and Hinduism extensively. As a child he demonstrated great ability as a poet and philosopher.

One famous story about Guru Nanak tells of his rebellion at the age of eleven. At this age Hindu boys of his caste would start to wear the sacred thread to distinguish them. Nanak refused, saying that people should be distinguished by the things that they did, and their individual qualities, rather than by a thread.

Nanak continued to demonstrate a radical spiritual streak - arguing with local holy men and sages, both Hindu and Muslim, that external things like pilgrimages, penances, and poverty were of far less spiritual importance than internal changes to the individual's soul.

He worked for a while as an accountant but while still quite young decided to devote himself to spiritual matters. He was inspired by a powerful spiritual experience that gave him a vision of the true nature of God, and confirmed his idea that the way to spiritual growth was through meditation and through living in a way that reflected the presence of the divine within each human being.

In 1496, although married and having a family, Nanak set out on a set of spiritual journeys through India, Tibet and Arabia that lasted nearly 30 years. He studied and debated with the learned men he met along the way and as his ideas took shape he began to teach a new route to spiritual fulfilment and the good life.

The last part of his life was spent at Kartarpur in the Punjab, where he was joined by many disciples attracted by his teachings.

The most famous teachings attributed to Guru Nanak are that there is only one God, and that all human beings can have direct access to God with no need of rituals or priests. His most radical social teachings denounced the caste system and taught that everyone is equal, regardless of caste or gender.