Sanskrit - The language of the gods

Sanskrit is the spoken and written language of the ancient Vedic civilisation who inhabited large parts of Asia during the great Vedic age over 5000 years ago and is the oldest language in the world. Such people were called Aryans and they were a very highly cultured race.

The word Aryan literally means advanced or progressive life which signifies a deep or profound understanding of the universe and purpose of life.  The script itself is called 'Devanagari' or the language of the gods and godly people.  The holy texts such as Bhagavad-gita, Srimad Bhagavatam, Mahabharat, Ramayana and the Upanishads are all written in the Devanagari script.  Sanskrit is a combination of two words - sam (complete) and krit (compile).   Sanskrit literally means a complete or perfectly composed language. 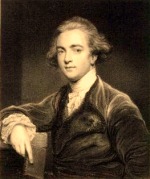 "The Sanskrit language, whatever be its antiquity, is of a wonderful structure; more perfect than the Greek, more copious than the Latin and more exquisitevely refined than either, yet bearing to both of them a stronger affinity, both in the roots of the verbs and the forms of grammar than could possibly have been produced by accident.  So strong indeed that no philologer could examine them all three whichout believing them to have sprung from some common source, which perhaps no longer exists.  There is a similar reason though not quite so forcible for supposing that both the Gothic and the Celtic, though blended with a very different idiom, had the same origin with the Sanskrit and the old Persian might be added to the same family."  Sir William Jones address to the Asiatic Society of Kolkatta, (February 2nd 1779). 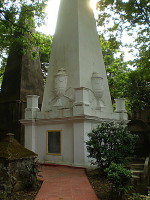 William Jones was born in London at Beaufort Buildings, Westminster; his father (also named William Jones) was a mathematician from Anglesey in Wales, noted for devising the use of the symbol π. The young William Jones was a linguistic prodigy, learning Greek, Latin, Persian, Arabic, Hebrew and the basics of Chinese writing at an early age.  By the end of his life he knew thirteen languages thoroughly and another twenty-eight reasonably well, making him a hyperpolyglot.

Opposite is a photo of the tomb of Sir William Jones in Kolkata.  Jones' father died when he was aged three. His mother Mary Nix Jones raised him. Jones attended Harrow in September 1753 and then went on to Oxford University. He graduated from University College, Oxford in 1768 and became M.A. in 1773. Too poor, even with his award, to pay the fees, he gained a job tutoring the seven-year-old Lord Althorp, son of Earl Spencer. He embarked on a career as a tutor and translator for the next six years. During this time he published Histoire de Nader Chah (1770), a French translation of a work originally written in Persian by Mirza Mehdi Khan Astarabadi. This was done at the request of King Christian VII of Denmark who had visited Jones – who by the age of 24 had already acquired a reputation as an orientalist. This would be the first of numerous works on Persia, Turkey, and the Middle East in general.

In 1770, he joined the Middle Temple and studied law for three years, which would eventually lead him to his life-work in India; after a spell as a circuit judge in Wales, and a fruitless attempt to resolve the issues of the American colonies in concert with Benjamin Franklin in Paris, he was appointed puisne judge to the Supreme Court of Judicature at Fort William in Calcutta, Bengal on 4 March 1783, and on 20 March he was knighted. In April 1783 he married Anna Maria Shipley, the eldest daughter of Dr. Jonathan Shipley, Bishop of Llandaff and Bishop of St Asaph. Anna Maria used her artistic skills to help Jones document life in India. On 25 September 1783 he arrived in Calcutta.

Jones was a radical political thinker, a friend of American independence. His work The principles of government; in a dialogue between a scholar and a peasant [London?]: printed and distributed gratis by the Society for Constitutional Information, 1783 was the subject of a trial for seditious libel after it was reprinted by his brother-in-law William Shipley.

In the Subcontinent he was entranced by Indian culture, an as-yet untouched field in European scholarship, and on 15 January 1784 he founded the Asiatic Society in Calcutta. Over the next ten years he would produce a flood of works on India, launching the modern study of the subcontinent in virtually every social science. He also wrote on the local laws, music, literature, botany, and geography, and made the first English translations of several important works of Indian literature. He died in Calcutta on 27 April 1794 at the age of 47 and is buried in South Park Street Cemetery.

Sir William Jones sometimes also went by the nom de plume Youns Uksfardi (یونس اوکسفردی). This pen name can be seen on the inner front cover of his Persian Grammar published in 1771 (and in subsequent editions as well). The second half of the pen name, Uksfardi, Persian rendition of "from Oxford", can be directly attributed to the deep attachment William Jones had for the University of Oxford. The first name Youns is a rendition of Jones.