"I teach suffering, its origin, cessation and path. That's all I teach", declared the Buddha 2500 years ago.

The Four Noble Truths contain the essence of the Buddha's teachings. It was these four principles that the Buddha came to understand during his meditation under the bodhi tree.

The Buddha is often compared to a physician. In the first two Noble Truths he diagnosed the problem (suffering) and identified its cause. The third Noble Truth is the realisation that there is a cure.

The fourth Noble Truth, in which the Buddha set out the Eightfold Path, is the prescription, the way to achieve a release from suffering. 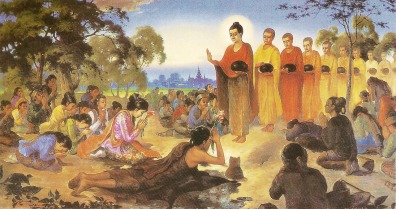 Suffering comes in many forms. Three obvious kinds of suffering correspond to the first three

sights the Buddha saw on his first journey outside his palace: old age, sickness and death.

But according to the Buddha, the problem of suffering goes much deeper. Life is not ideal: it frequently fails to live up to our expectations.

Human beings are subject to desires and cravings, but even when we are able to satisfy these desires, the satisfaction is only temporary. Pleasure does not last; or if it does, it becomes monotonous.

Even when we are not suffering from outward causes like illness or bereavement, we are unfulfilled, unsatisfied. This is the truth of suffering.

Some people who encounter this teaching may find it pessimistic. Buddhists find it neither optimistic nor pessimistic, but realistic. Fortunately the Buddha's teachings do not end with suffering; rather, they go on to tell us what we can do about it and how to end it.

Our day-to-day troubles may seem to have easily identifiable causes: thirst, pain from an injury, sadness from the loss of a loved one. In the second of his Noble Truths, though, the Buddha claimed to have found the cause of all suffering - and it is much more deeply rooted than our immediate worries.

The Buddha taught that the root of all suffering is desire, tanhā. This comes in three forms, which he described as the Three Roots of Evil, or the Three Fires, or the Three Poisons.

The three roots of evil

These are the three ultimate causes of suffering:

Language note: Tanhā is a term in Pali, the language of the Buddhist scriptures, that specifically means craving or misplaced desire. Buddhists recognise that there can be positive desires, such as desire for enlightenment and good wishes for others. A neutral term for such desires is chanda.

The Buddha taught more about suffering in the Fire Sermon, delivered to a thousand bhikkus (Buddhist monks).

The Buddha went on to say the same of the other four senses, and the mind, showing that attachment to positive, negative and neutral sensations and thoughts is the cause of suffering.

The Buddha taught that the way to extinguish desire, which causes suffering, is to liberate oneself from attachment.

This is the third Noble Truth - the possibility of liberation.

The Buddha was a living example that this is possible in a human lifetime.

"Estrangement" here means disenchantment: a Buddhist aims to know sense conditions clearly as they are without becoming enchanted or misled by them.

Someone who reaches nirvana does not immediately disappear to a heavenly realm. Nirvana is better understood as a state of mind that humans can reach. It is a state of profound spiritual joy, without negative emotions and fears.

Someone who has attained enlightenment is filled with compassion for all living things.

Path to the cessation of suffering (Magga)

The final Noble Truth is the Buddha's prescription for the end of suffering. This is a set of principles called the Eightfold Path.

The Eightfold Path is also called the Middle Way: it avoids both indulgence and severe asceticism, neither of which the Buddha had found helpful in his search for enlightenment.

The eight stages are not to be taken in order, but rather support and reinforce each other: