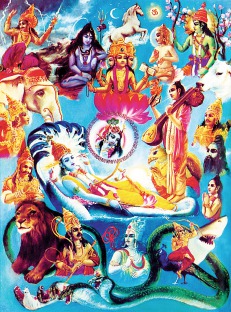 Hindu deities are the gods and goddesses in Hinduism. The terms and epithets for deity within the diverse traditions of Hinduism vary and include Deva, Devi, Ishvara and Bhagavān.

The administrative deities of Hinduism or 'gods' have existed from the Vedic era through the medieval era regionally within Nepal, India and in southeast Asia and across Hinduism's diverse traditions.

The Hindu deity concept varies from a personal god as in the Bhakti Yoga school of Hindu philosophy to 33 Vedic deities, to hundreds of Puranic dietes within Hinduism.  Major deities that include the Tri Murti of Vishnu and Lakshmi, Shiva and Sati, Brahma and Saraswati.  God Almighty Himself is said to be worshipped by the millions of 'gods' and mankind.  He sumultaneosly possess an eternal spiritual form and an impersonal form of light which is lcompared to the sun planet and the sunshine being non-different as form and its energy.

These deities have distinct and complex personalities, yet are often viewed as aspects of the same Ultimate Reality called Brahman, mailnly due to the influence of Shankaracharya's teachings (788 - 820). From this time, the idea of equivalence has been cherished for all Hindus, in its texts and in 1st millennium sculpture with concepts such as Harihara (half Shiva, half Vishnu), Ardhanārīshvara (half Shiva, half Parvati) with stories and temples that feature them together, declaring they are the same.

Major deities have inspired their own Hindu traditions, such as the oldest version of Vedic Dharma called Vaishnavism, followed by Shaivism  and Shaktism, but with shared histories, ritual grammar, theosophy, axiology and polycentrism.  Some Hindu traditions such as Smartism from mid 1st millennium CE, have included multiple major deities as henotheistic manifestations of Saguna   Brahman, and as a means to realizing Nirguna Brahman, or God without characteristics and form. This formless view of God has also been adapted by Buddhist, Chirstian, islamic and Judaic theologists.

Hindu deities are represented with various icons and anicons, in paintings and sculptures, called Murtis and Pratimas. Some Hindu traditions, such as ancient Charvakas rejected all deities and concept of god or goddess while 19th-century British colonial era movements such as the Arya Samaj and Brahma Samaj rejected deities and adopted monotheistic concepts similar to Abrahamic religions.  Hindu deities have been adopted in other religions such as Jainism and in regions outside India such as predominantly Buddhist Thailand andJapan where they continue to be revered in regional temples or arts.

In ancient and medieval era texts of Hinduism, the human body is described as a temple and deities are described to be parts residing within it while the Brahman (Absolute Reality, God) is described to be the same, or of similar nature, as the Atman (self, soul), which Hindus believe is eternal and within every living being.  Deities in Hinduism are as diverse as its traditions and a Hindu can choose to be polytheistic, pantheistic, monotheistic, monistic, agnostic, atheistic or humanist.  As they say... 'the choice is all yours'.